Posted on September 26, 2010 by bullittcountyfreedomfighter 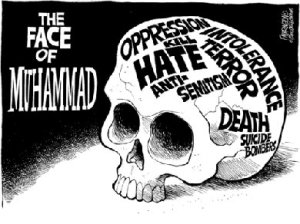 The Muslims downplay the above question by scoffingly answering in the negative despite mounting evidence to the contrary.  Of course getting devious answers from Muslims is to be expected; that is, until they are ready to threaten a lawsuit due to being offended.

(Islamic law) through lawsuits and demands made by Muslims in America on an almost daily basis. Whether it’s the Somali Muslim cabdrivers (Mpls.,MN) who refuse to pick up fares who have been consuming alcohol to disabled people with a service canine or it could be something like Muslims demanding foot baths in a public building, it’s the incremental creep of imposing Sharia Law in the US.”

In the same issue of the Bear Creek Ledger this report was published: “Last year Stephen Coughlin (a Pentagon specialist on Islamic law and extremism) was fired because of Muslim officials in the Pentagon who opposed his work. You think there is no threat in the US from Islamists in this country?’‘

Also, this offering from Brian Mosely of the Shelbyville (TN) Times:  “Every major Muslim organization is controlled by the Muslim Brotherhood, a former FBI Agent John Guandolo said, which he said was formed to overthrow America and establish Islamic law.

“They’re having great success of implementing Shariah law, I could give you a thousand examples,’’ Guandolo said.

He said small concessions like installing foot baths, and colleges forced to have separate swimming times for Islamic men and women so not to offend Muslims, are other parts of the strategy.

“The solution to this is you,” Guandolo said. “If you are looking to DHS, the FBI and Congress to solve this . you’re going to be woefully disappointed.”

So even a former FBI Agent agrees with the premise that Sharia is working its way into and through our judicial system at all levels; and their arrogant and selfish demands for attention are being heard and dealt with by people in authoritative positions.

The above mentioned Bear Creek Ledger covered this story on August 02, 2008 from Shelbyville, TN that the large Tyson Foods’ poultry processing plant had pandered to the Somali Muslims employed there by dropping Labor Day as a paid holiday and adding the Islam holiday of Eid al-Fitr which occurs near the end of Ramadan.  Out of 1,200 employees at the plant, Somalis represent approximately 250 or about 20 percent of the total.

It was reported that Shelbyville’s Tyson plant “does have a prayer room to accommodate the needs of Muslim Team Members/”  Also reported was that “the Somali’s have a very active legal advocate system and they use it to advance their extremist culture. Don’t expect the Somali’s to assimilate to American culture. They will use our laws to make money and then sue to advance their own Islamist ways.”

One more of the many events that the Bear Creek Ledger’s author Toni provides is one titled, “More Dhimmitude from Minnesota” about a school in that state that bows to Islam but fights the terror threats of Christianity; (the underlined are my words, not Toni’s.)

On April 12, 2007, Toni relates an example provided by Powerline’s Katherine Kersten about installing foot washing basins in the schools of Mpls. Community & Technical College.  Kersten reports that the officials of that school say the college, a public institution, has a strict policy of not promoting religion or favoring one religion over another.

Kersten says, “Where Christianity is concerned, the college goes to great lengths to avoid any hint of what the courts call “entanglement” or support of the church. Yet the college is planning to install facilities for Muslims to use in preparing for daily prayers, an apparent first at a public institution in Minnesota.”

Separation of church and state is clearest at the college during the Christmas season. A memo from . President Phil Davis, dated Nov. 28, 2006, exhorted supervisors to banish any public display of holiday cheer: “As we head into the holiday season . all public offices and areas should refrain from displays that may represent to our students, employees or the public that the college is promoting any particular religion.

“They appear to take a very different attitude toward Islam. Welcome and accommodation are the order of the day for the college’s more than 500 Muslim students. The college has worked with local Muslim leaders to ensure that these students’ prayer needs and concerns are adequately addressed, Davis told me.”

According to Wikipedia, Minneapolis Community and Technical College has about 12,000 students.  If, as Kersten says, the Muslim population at the College is “more than 500 students”, that means that the Muslims represent about four to five percent of the total enrollment.

What sort of power does the Islamist-Muslim religion have to cause the school to ignore the religious beliefs and practices of more than 11,000 students or about 95 percent of the students while catering to “more than 500 students,” about 4 to 5 percent?

I’d like to pose that question to Governor Pawlenty, a potential presidential candidate in 2012.

Then again, perhaps I should ask the renowned Washington Post columnist, Eugene Robinson, of the National Association of Black Journalists.  He associates frequently on the MSNBC shows of Olbermann, Maddow and Matthews and he is also deeply endowed in their perverted bias to matters un-American and anti-Christian.

Guy Rodgers, Executive Director of Act for America quoted Robinson when he dismissed any concern about a “stealthy insinuation of sharia into America’s legal system, because no such thing is happening.”

Rodgers continued, “In a September 21st, column Robinson belittled Newt Gingrich for painting “Islam as the new Red Menace” unveiling the latest, and predictable, name-calling tactic intended to put us in our place-we’re all supposedly engaging in “McCarthyism.”

“Robinson’s arrogance is exceeded only by his ignorance” said Rodgers then also added these examples of what Gingrich was alluding to:

As I have said before in other columns, the danger of continuing in power the liberal Democrats who are hell-bent to install a Socialist form of government is one that we can remedy in the November elections by firing ALL of them.  But the creeping incursion of Islamic-Muslimism is another matter.

In another column I equated that problem to a creeping form of cancer that can wipe out the entire country just by swallowing up everything that we allow them.  Compliance with their demands HAS GOT TO STOP.

First get rid of the liberal Democrats that encourage the spread of Islam and then get control of the Muslims that perpetrate it and enforce OUR Constitution.

A Patriot who has sworn to defend the Constitution against all enemies foreign and domestic. Standing against the destruction of the bill of rights and the usurptation of the office of President of the United States of America. WHERE'S THE BIRTH CERTIFICATE
View all posts by bullittcountyfreedomfighter →
This entry was posted in Uncategorized. Bookmark the permalink.